Because procrastination should never feel fruitless 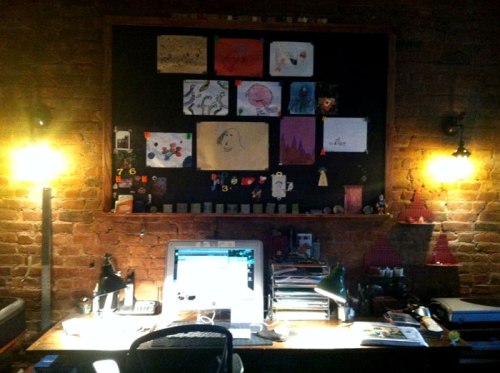 There are walls that join and walls that divide. The wall behind my computer screen separates my apartment from a family who, in some form or other, has lived on the other side since before FDR. They invited us to Christmas dinner two days after we first moved in and have asked us to countless Fourth of July and Labor Day and Easter barbecues since then. They warn us when they see rats lurking in the ivy out back, or when my wife has left her keys in the gate under the stairs, and they’ve confidentially offered to break the knees of any future suitor who has the misfortune of slighting our currently-six-year-old daughter. They were beyond sheepish and contrite about suing us when a tornado knocked our chimney through their roof and our insurance was slow to pay. The wall behind my computer screen is brick and load-bearing and divides for the best. It is finished otherwise on the other side, but I’m sure my neighbors feel the same.

I’m equally sure the fence out back makes me a better neighbor to the older Chinese couple who live to my left. I admire the perennial effulgence of their regimented hydrangeas and I have never once imagined what it would be like to have Christmas at their place. Until now. It’s just as well it never happens. I don’t know the people who live behind my building other than that a woman who used to live  on the ground floor behind us had the world’s worst laugh. The kind of laugh that jolts you out of your darkest existential musings and makes you think about ending it all now. Or moving. Or both. Anyway… said neighbor has either stopped finding anything in life to laugh about… or she’s moved. I can’t imagine there not being a fence around the back yard. Without it my clematis and climbing roses would feel aimless and squat. So would I. It would like gardening in the nude. But worse.

The wall in the common hallway of my building was not a dividing wall until it had legs. It was and is a joining wall. One that joins me and my upstairs neighbors together. It is ours collectively. Our hall. Our wall. We share the expenses of plastering and painting and keeping it clean. None of us has parents who were born before The New Deal. Some of us think the hallway looks better with giant construction paper legs growing from the baseboards. Others feel differently. But a shared hallway should never be a fence between vertical neighbors.

Maybe that’s one of the things about mending walls Frost was talking about? The strange dance between division and cohesion that makes the best walls work on both sides. Sometimes toes will be stepped on, but as long as everyone is willing to keep their feet moving there is a hope of music in the footwork.

This was supposed to be a post about arms. So much for that.

Alas… my neighbors didn’t love the second leg. They likely never loved my first leg either, but they definitely didn’t love the second one. There will be no chorus line of giant construction paper legs kicking their way up to the roof. Leg one gamely gammed it up  for a season or two. Leg two lasted a week. The best laid plans…

I’m actually totally fine with taking down my legs. They’re happily lying next to the Sunday Times in the recycling bin.  The fun was largely in putting them up and scratching the itch. That “I must have giant legs in the hall” itch we all sometimes get and usually ignore. The only downside to this whole escapade is I put my neighbors in the awkward position of wanting me to take my legs down but being afraid to ask me to do so. That’s not a good position.

I emailed my neighbors the day I put my legs up and told them I’d gladly take them down. I really tried to sound cheery and neighborly about it, but without sounding overly glad in that way hostilely nice people make gladness feel oppressive and fake.  No reply. Not even after two days. This was not a good sign. My neighbors are great repliers.

So I emailed them again on the off chance my first email somehow got waylaid because of all the virtual frothing over Harry Reid’s insinuations about Mitt Romney’s tax returns and Time Warner’s ongoing lackluster service as my ISP. I reiterated my gladness at taking down the legs and made a point of flagging the unassailable truth that it would be more than within their bounds as sane nieghbors to not want to have giant legs sprouting up  in their commonly shared hallway. I was still secretly holding out hope the first email just got lost along the way. But there was no reply to my second email.  From either of them. The chance that two emails sent to two different addresses didn’t arrive at either address either time seemed less than slim. It was clear my neighbors were afraid to email me back.

Less than a week before these very same neighbors encouraged me to let myself into their apartment,  go onto the roof, and take as much of their thyme and oregano and zucchini blossoms or tomatoes or anything else I wanted. I have dined in their home. With my my family. More than once.  They are dream neighbors. They just happen to be part of that reasonable percentage of the population who prefer not to walk past six-to-seven-foot tall construction paper legs twice a day. Or so it seemed from their notable silence. I needed to take down my legs.

A sane person would have just taken them down. Correction: a sane person would have never put up legs in the first place. A marginally less sane person would have just taken down the legs he’d already put up. I still wanted to believe there was something else afoot. Perhaps my neighbors were having marital problems? Or problems at work? That would explain their not replying to either of my emails about legs in the hall. They just had something more pressing to address. It was beyond sad to think my neighbors were potentially on the cusp of divorce or that they might have to move because one of them had lost their job. How lame to think they cared about my legs when they had more serious things to negotiate between themselves.

They finally called over the weekend. To talk about an unrelated matter. I was out walking my dog and we were sitting under the shade of a large tree in the park trying to avoid the heat. When there was a pause in the conversation I cheerily brought up the legs. There was another pause and then there was some limber dancing around whether the paper and tape might ruin the paint on the walls, but it was clear what we were really talking about. I promised to take down the legs on Sunday. They said no rush. That was Saturday around lunchtime.

I didn’t take the legs down Sunday because I didn’t want my neighbors to have to walk by me while I was taking them down. That seemed too awkward. Best to have the legs disappear the way sausage is prepared. Out of view so no one has to see what’s really happening. But I wanted my neighbors to know there were no hard feelings about their wanting me to take down my legs. So we invited them over for drinks and hors d’oeuvre Sunday night. They had to walk past my legs to knock on our door. They brought down a bottle of Proseco. My daughter played them Ode to Joy on the piano. And she did pantomimes about pulling dinosaur skulls with imagined lengths of rope. We talked about everything but legs. I’m glad to report my neighbors appear to be happily married and by all accounts both are still gainfully employed.

After everyone left for work this morning, I went out into the hall and took down the legs. I Ready-Patched anywhere even the slightest bit of paint came off with the tape and a first coat of paint is almost dry. I don’t want there to be any trace of those legs haunting the hallways. I like my neighbors too much and I never want them to feel like they have to dance around me. But I would be lying if I didn’t admit there’s still a very tiny part of me that wants to see giant legs kicking all the way up to the roof. Mum’s the word. 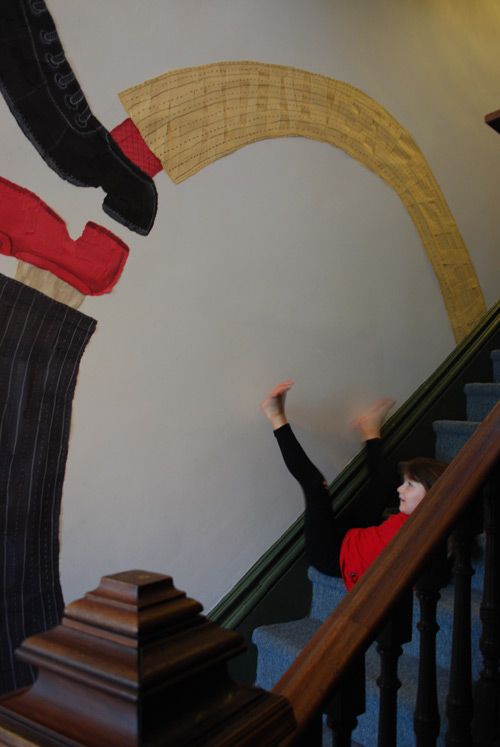 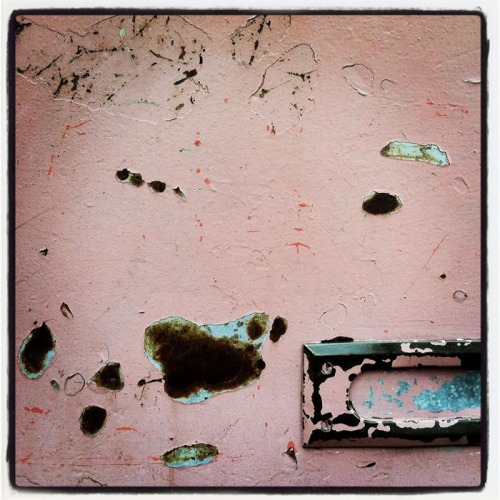 Whenever you get tired of looking at sidewalk gumstains and paintblobs or when looking for lost washers starts to feel onerous instead of joyful, there are always metal entry doors to keep your spirits up. And parking bollards. And MoMA. 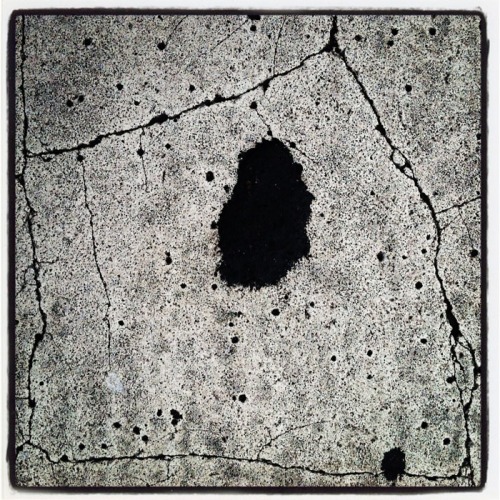 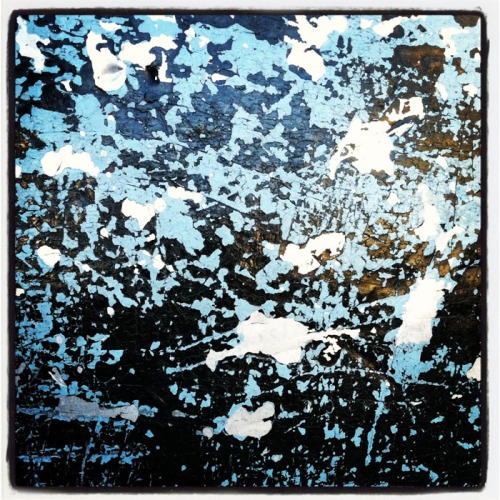